Wetlands are natural stormwater retention basins, that absorb and store large amounts of stormwater runoff. Soils, vegetation, water bodies, and land area can hold large capacities of water from high rainfall events, and will gradually release the water over time. Water is absorbed down into the water table, and is also lost through evaporation. Excess water will usually find its way to the ocean or spill over onto neighboring grounds. The surface area of wet ground expands and contracts with increasing rainfall and runoff. Areas adjacent to permanently wet wetlands may become temporary wetlands (ephemeral wetlands). These normally-dry areas that have the capacity to become flood zones, are also important of the watershed system. Open space areas in flood zones are also especially important as natural flood-mitigators.

Stormwater is best managed on land so that contaminated water does not go directly to the ocean. Wetlands filter dirt and other contaminants from stormwater runoff, and are vital for the protection of our reefs and oceans.

Wetland maintenance and care: Natural wetlands are usually the focus of conservation efforts, as they can become a habitat for native plant and animal species. neglected wetlands may need restoration, which may require a permit, but this work is often carried out by volunteer groups.

During and after restoration, wetlands are also a resource for cultural and ecological education.  These wetlands are also vital habitats for many water-loving species, many of which may include threatened or endangered waterfowl, for example, Nene, Aeo, and Coot. Wetlands are also habitat and feeding grounds for other species like the indigenous Pueo and endemic Hoary bat. 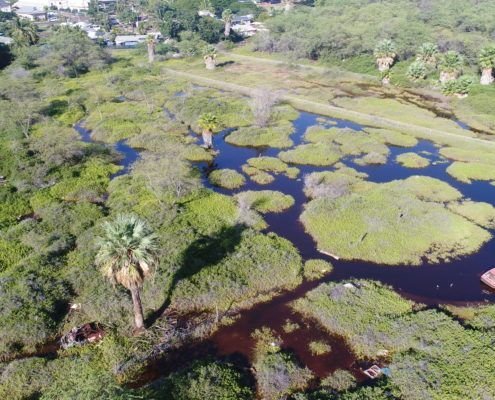 It is cheaper, faster, and better to preserve our natural wetlands, than it is to build artificial infrastructures that attempt to do the same job. Nature is better at creating and designing these dynamic structures, that integrate so many benefits.  While we can never hope to duplicate nature’s perfection, we must however learn to appreciate it, respect it, and fight to preserve it.