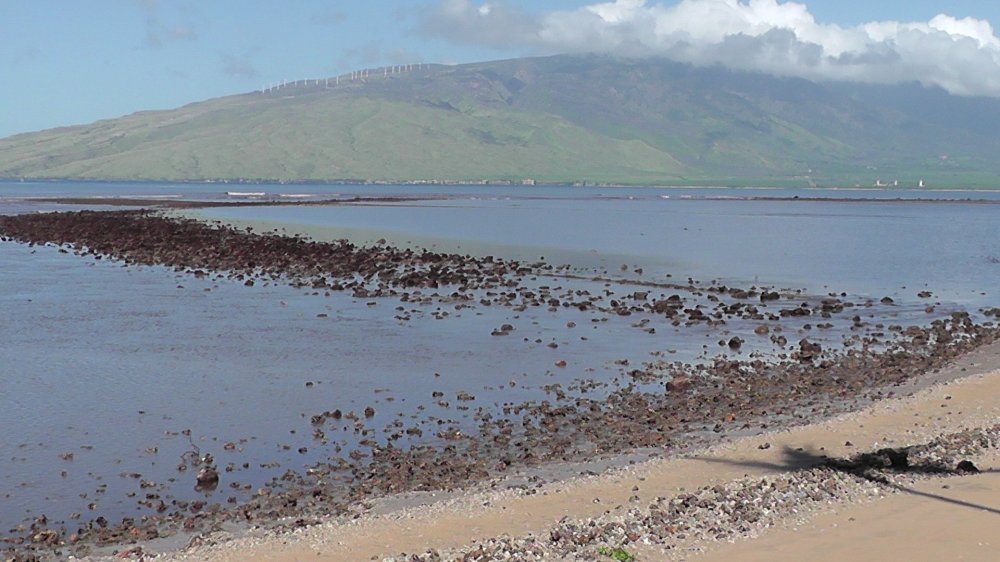 Traditional and Cultural Uses: The (4) fishponds collectively known as Kalepolepo Fishponds have cultural significance and are associated with 2x Heiaus. The fish ponds of the adjacent shoreline of Kula-kai provide an important resource that is still in use today, for archeological, educational, and cultural reasons. There remains a series of ponds enclosed by man-made sea walls that were constructed in ancient times. The most famous of which is  Ka’ono’ulu Kai but also Waiohuli Kai and Keokea Kai to the south and a fourth called, Kulamoemalia.

These structures may date back to some of the earliest human settlements around 1400’s or even earlier. These ponds have been associated with at least Heiau structures on shore and other archaeological sites of significance. Trails in the area were used to connect the resources to various parts of the island. These loko iʻa structures are precious archeological artifacts that deserve to be preserved, and have been rebuilt several times throughout history.

“This type of setting was selected most frequently for the construction of loko kuapa (walled ponds), due to wave protection provided by the reef and the presence of a shallow shoal area. Kalepolepo Fishpond is significant as a well-preserved example of the technological achievements associated with the development  of Hawaiian aquaculture. The fishpond was an economic resource that was important for its subsistence value to the people of the Kula District between approximately AD 1500 and 1880.”  https://historichawaii.org/tag/mauisites/

These ponds created a shallow lagoon where traditional fishing methods were used such as nighttime spearfishing. Still till this day these anthropogenically-enhanced environments are important for various forms of fishing and limu collection.

The fishponds of Kula-kai (Kihei): Many of Kihei’s fishponds have been documented by various archaeological surveys and have State Inventory of Historic Places (SIHP) registrations. The old fishponds at Waipuilani can be seen at low tide and in aerial photography. It is thought that some of these ancient fishpond’s materials were used in the 1800’s to restore the famous Koieie fish pond (pictured on the far right). Fishponds would require periodic rebuilding due to the effects of waves, stems, tsunamis, and volcanic effects. Ancient chants mention the periodic repair of these ponds by important Alii.

Interestingly, the areas that flood the most are the low-lying, and wetland areas mauka of the fishponds, which may indicate that they are likely part of larger system of inshore ponds (Loko Wai), Taro Patches (Lo’i Kalo), and a natural waterways that were known to and managed by the indigenous people of the area.  It can be presumed that Kihei has lost many of its inland ponds (Loko wai) and taro patches due to siltification and neglect. A period of high rain and erosion was experienced during the later part of the 19th century. Due to deforestation and cattle activity upcountry. More archaeological studies need to be carried out in the undeveloped wetland areas. *Fish ponds are often associated with freshwater or brackish water sources, and inshore aquaculture.

Preserving Historical Sites:  According to the Kihei-makena Community Plan 1998,