Sharks are Real. Take care out there. #sharksofkihei

This is Shark Season in Hawaii:  This season is known by Hawaiians to be the shark bite season. These tips are good advice year-round, but they are particularly important at this time of year.

What you need to know: Sharks rarely bite humans, but occasionally they do, and sometimes it is fatal. Sharks usually ignore humans as food, but there are situations when humans act like food, and sharks are either confused or will take advantage of an opportunity given to them. The best practices to avoid unwanted shark encounter is to avoid sharks that are feeding, and also to not make yourself look like food or act like food.

Why is this shark season?

To avoid sharks, people should adjust their ocean activities accordingly:

Best practices for Ocean activities: Stay inside the reef. Do not go out over the edge of the reef. On a kayak, SUP, Swimming, snorkeling, or even in a small boat. When you approach whales you are also approaching the sharks that are attracted to the whales.

How to survive a shark bite: Most people do not typically die from shark bites, they die from massive blood loss from the wounds. Stopping the bleeding and getting help quickly should be the top priorities. Apply direct pressure to the wound, and use a tourniquet if necessary.

Where is it safe to swim? In the ocean, nowhere is 100% safe from sharks, but to be safer from sharks, always stay close to shore, and swim in between the flags at a lifeguarded beach. You will not be totally protected from being bitten, but you are much more likely to survive a shark bite because you are closer to help. The safest options are to swim in your hotel swimming pool at this time of year. And if you want to see sharks, visit the Maui Ocean Aquarium.

What months are sharks most active in Hawaii?   The number of incidents based on statewide shark data 1950-2021. The relationship between the number of people in the water and the number of shark bites is not always as expected. There appears to be an increased risk of being bitten by a shark during certain months, in particular, October through December. Hawaiʻi Sharks | Incident Graphs 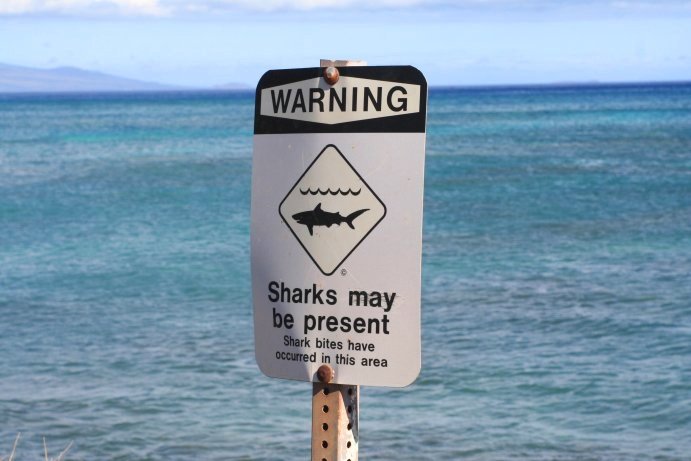