Why have people been walking on the roadways since the 1960’s?
Where are all the curbs and sidewalks that keep pedestrians safe?

Pedestrian access issues: Some people erroneously describe Kihei as a “walking neighborhood”. But sadly many areas of Kihei have no contiguous sidewalks. The roadways have no shoulders either. This image is from the Kihei Transportation Plan 2020.

Curbs, Gutters Sidewalks: There is a stark lack of basic infrastructure in Kihei, especially along South Kihei Road, and many side streets. Older roads are deficient in basic infrastructure. This deficiency creates dangerous conditions for pedestrians, children, and bicyclists. Without sidewalks, pedestrians are forced to walk along roadways close to cars. In many parts, vegetation close to the shoulder forces pedestrians and bicyclists to walk onto the carriageway. In North Kihei, sand drifts encroach onto the roadway and make pedestrian access even more difficult. Flooding too makes pedestrian access impassable in many areas. 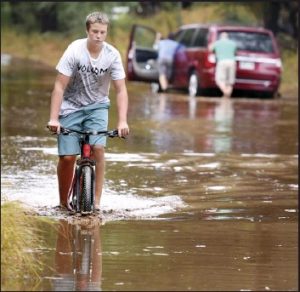 Pedestrian accidents and fatalities: The county is promoting Vision Zero, which aims to prevent pedestrian and traffic deaths, They are putting a high priority on infrastructure, So maybe they should put in some sidewalks. 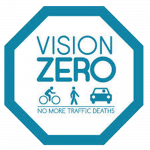 According to the Planning Director Michele McLean at the KCA meeting 3/16/21 , the financial responsibility for such infrastructure is usually placed onto developers. Developers are required to improve the infrastructure around their developments. But this approach is piecemeal and ad hoc, and does not lend itself to the creation of contiguous sidewalks and a connected system of pathways and pedestrian-friendly communities.  KCA President Mike Moran said that he has been asking for and waiting for 17 years for sidewalks to be put in Kihei.

PROVISION OF NEEDED PUBLIC FACILITIES AND INFRASTRUCTURE.
The County of Maui in general, and Kihei-Makena in particular, witnessed significant growth in the 1980s and early 1990’s. In many instances, however, public facility and infrastructure improvements lagged behind development in the region. As such, a significant upgrade and expansion of existing public facilities and infrastructure are necessary.  Page 15, https://www.mauicounty.gov/DocumentCenter/View/1712/Kihei-Makena-Community-Plan-1998

Kulanihakoi Bridge Culvert:  Some of the worst flooding in Kihei occurs at the Kulanihakoi Bridge. The gulch behind the bridge/culvert floods and overflows its banks. The original roadway/culvert was inadequate to handle the high flow, and as a result, caused the river to back up and flood the surrounding neighborhood and cross over the roadway. In approx 2018 the old roadway/culvert was replaced with a new bridge, but unfortunately, they left the old roadway/culvert structure in place underneath. So the new bridge, while higher, did nothing to increase the flow rate, or reduce the constriction that caused flooding. According to a Maui News article: “Some Kihei residents and community organizations are urging the county to halt the Kulanihakoi Bridge Replacement project, saying it will not stop flooding in the area and will interfere with Native Hawaiian practices and impact a freshwater spring”. Photo Caption: Cars go over the Kulanihakoi bridge culvert on Wednesday afternoon South Kihei Road. The county is preparing to replace four culverts that are susceptible to flooding with a six-culvert structure. The Maui News / MATTHEW THAYER photos. 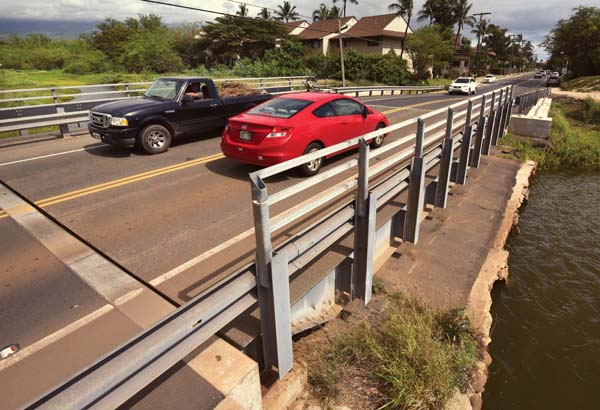