UPDATE 7/18/22 Thanks to Everyone who testified Today and at the other meetings. The Council voted 6:3 to Support the motion to Disapprove this project. This is a win for the community and for the environment.

Good job and thanks for speaking up for the Aina. 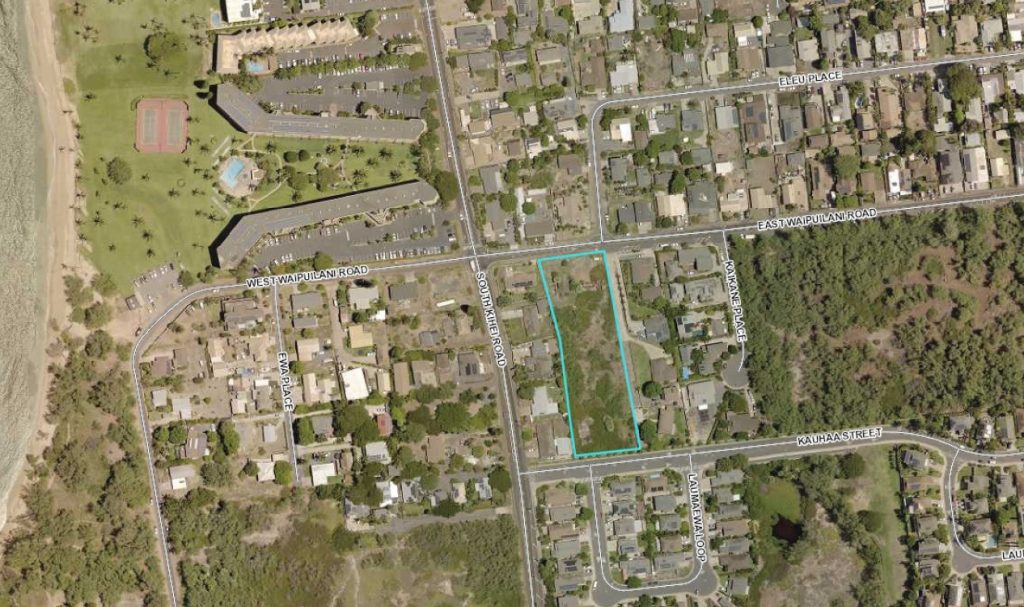 The “Hale Waipuilani” project would be built in a notorious Flood Zone. This is a high-density project designed by mainland architects and planned for a notorious flood zone. The County should not allow more housing to be built in the flood zone, because it will put future residents and neighbors in harm’s way.

Decades of County neglect have made this low-lying neighborhood in Kihei into a flooding black spot. The County has been aware of flooding for years and knows what it would take to fix the problems, but it has no plans to add the necessary infrastructure such as stormwater drainage to make these areas safe to live in. But the County keeps allowing more development on the flood plains which only makes the flooding situation worse.

While our community supports truly affordable housing for locals, We are against building more houses in the flood zone. This is possibly the worst place in Kihei to build homes, and there are many better locations. For example, on higher ground.  It will create a hazardous situation for occupants and neighbors. Flooding, Traffic, and Emergency Access are the immediate concerns. This grossly inappropriate project, if approved, will have a negative impact on the neighborhood, community, and the environment. The project would also potentially harm the area’s natural, cultural, & recreational assets. And it will create a safety hazard for the tenants and the surrounding residents. And it is not even affordable for locals. Similar workforce housing projects have sold mostly to newly-arrived mainlanders and sadly most local families do not even qualify. This is a serious problem with the rules that we are trying to change in the future. But meanwhile, developers are taking advantage of this “Loophole”.

Financial Windfall for Developers: Pushing this project through would mean a huge financial windfall for developers and builders, as it is worth well over 15 million dollars. For-Profit Developers are taking advantage of fast-tracking, county subsidies, and waived fees to build these projects. The County taxpayers end up footing the bill for these, and the for-profit builders end up with a great deal.

This property has a number of problems and is a bad choice of location for many reasons including:

The flooding roadways, and traffic problems have been well known for decades. But sadly much-needed improvements to Kihei’s stormwater drainage have been in the planning stages for years, but have never materialized. What is not as well known is that the Waipuilani/South Kihei Rd intersection once had a private stormwater pumping system owned and operated by Maui Sunset Condos, which is now defunct. They even had an agreement with the County to Remove Stormwater from the local streets by pumping with pump trucks. and paying these expenses, But they never followed through on their promises. And now the County taxpayer has to pay for pumping every time there are heavy rains, and stormwater gathers on Waipuilani Road. Private deals and promises from developers cannot be relied upon to solve the area flooding issues.

The biggest problem currently is that there is no stormwater management system and no drainage infrastructure in place. This area is incapable of accommodating any high-density residential projects safely. Putting a new project in this already flood-prone area puts more people in harm’s way. It also increases the risk to the local population as more people need to be evacuated in an emergency causes delays and stretches the resources of emergency services. The County’s 2016 KDMP Drainage Plan estimates that Kihei needs 133 million dollars in investment in Drainage Infrastructure to address the flooding problems.  But there is money set aside for that, and no plan to move ahead with this. According to testimony from the DPW (Dept of Public Works) representative, the needed drainage improvements for Kihei may be 20 years away.

There are better-suited places to build this type of project:  This project should be relocated to higher ground, out of the flood zone. Pre-FEMA mistakes of past decades should not be repeated. The Builder admitted that he “didn’t even want to build here”, and that he was only doing this “as a favor for a friend”, and he could just as easily and cheaply build it Mauka of the Highway. The Maui County has even been in discussions with the developer about the possibility of offering them a land-swap for more suitable land near the Kihei Police station, but so far the developer has rejected this offer.

Problems with this type/style of development:

Road Flooding: Many residents are concerned that this will make road flooding worse. And if this project causes more road flooding it will not be approved.

House Flooding: Many Residents fear that this project will make area flooding worse, and stormwater from this site will impact their properties and homes.  According to the Rules, this is not allowed.

Increased Stormwater Production: The builders have admitted that this project will add almost One Acre of rooftops and impervious surfaces, and increase its stormwater production by around 6,000 gallons per hour, but they intend to let it soak into the ground or will try to keep it on their property. However during the floods, the ground is usually fully saturated, and there could be water flowing across this property. They cannot guarantee that they can keep all their stormwater on-site, and there are no stormwater drains.  When floodwaters build up in this area there is nowhere for it to go.

FEMA Flood Zone: This property is located in eth FEMA AH Flood Zone that can experience flooding and ponding from 1-3 feet deep. Local residents have experienced many storms and floods, where the water backs up into deep pools and last for days.

This part of Kihei has a High Water table, that is easily flooded. The water table is usually only a foot or two below the surface, but this gets higher when it rains. In a heavy storm, the water rises up through the ground and creates localized flooding. The high water table also stops stormwater from soaking into the ground, and it can take many days for floods and ponding to recede.

Because of the many known issues, no exception should be given to current zoning rules. Please do not approve this high-density residential development in a dangerous flood zone.

Many Neighbors and local Residents have commented that the local area has bad roads and terrible traffic: The roads here have few sidewalks and no curbs or drains, which creates hazardous conditions for pedestrians.

At several Public Meetings with the County the Public has repeatedly testified against the Hale-Waipuilani project:

The main points testified to were,

We shouldn’t be building more houses in Kihei’s worst flood zone:   There are better places to build housing away from flood plains and coastal hazards. Kihei has an aging infrastructure, bad traffic, and a lack of area drainage. The local area surrounding this specific project has no drainage and is known to flood.

The development will increase Stormwater Production: The Hale Waipuilani development would add approximately One Acre more of stormwater producing surfaces. The combined area of Roof, Driveways, and other impervious surfaces that will produce stormwater is about an acre. This represents a significant change to existing drainage and flooding conditions.  The proposed drainage calculations estimate approximately 6,000 gallons/hr will be added to the local stormwater loads.

The Planned Drainage System will not work:  Several people including drainage experts and architects have testified that the planned under-ground, under-building drainage retention will not work. The proposed method of stormwater disposal relies on the percolation of stormwater into groundwater using narrow perforated pipes in underground storage ponds. This type of system is known to be high maintenance and quickly loses its effectiveness if not properly maintained.

Underground Storage System:  This area site is within the FEMA AH flood zone with 1-3 feet of surface ponding. So any stormwater detention holding “tanks” would need to be placed above the 3-foot flood height. Any underground storage system would not work during anticipated storms with 3-foot deep ponding and surface flooding.

Underground percolation will not work with rising water tables:  The proposed underground “perforated-pipe retention ponds” would not work in the event of rising groundwater. Prolonged rain events such as Kona Storms can last several days, and typically saturate the ground and bring water tables to the surface.  So the proposed underground drainage solutions would likely fail at the worst possible times during a Kona Storm flooding event.

The Hale Waipuilani project should not be approved:  We should not put more housing in the flood zone. This area has multiple risk factors and there are many better locations to build affordable homes.

A land swap deal is the best option:  Maui County currently doesn’t have the 133 million dollar budget to fix drainage Infrastructure to make Kihei safe from flooding. But the County does have land. The County has land available at the Kihei Police Station, at Maui Lani, and in the central valley near Pu’unene. Any of these areas are far better suited for housing, and are free from the flooding, and coastal hazards of tsunami, sea level rise, and climate change.

The County needs to protect Kihei:  Kihei cannot accommodate more traffic, or more housing in flood zones, so we need to reduce development on the flood plain, and encourage a retreat from the shoreline. Urban areas and new housing should be on higher ground, and far from known flood zones. Only the County has the power to make the decisions necessary to make this happen.

The best use of 16 E Waipuilani is Conservation:

Keep the property as is:  Preserving this lot as is, has many benefits and will not overburden the local community or its aging infrastructure. The site’s original historic house can remain, and continue to provide housing. The open space and undeveloped land, can continue to provide beneficial services. The site’s uncompacted Jaucus and Loamy sand soils can continue to function as a settling area for neighborhood floodwaters, and the site’s native vegetation can be encouraged to provide ground cover and habitat for native species. Other possible uses could include becoming an urban nature park or a community garden.