SAVE WAIPUILANI GULCH:  Irresponsible developments are destroying our watershed, and filling in our last remaining gulches and floodways.

About the Hoonani Development: A longtime for-profit housing developer is proposing an 81-unit project of single-family homes and townhouses in Kihei that’s expected to open up to the first residents early next year. Worst of all, these are being built in a streambed, which is the area’s only floodway. This gulch has to handle stormwater runoff and flash flooding events but is already insufficient at handling the volume of water coming down the gulch. Building in this gulch will reduce the gulches carrying capacity and restrict the water flow. This will create problems for neighbors surrounding the gulch and especially neighbors downstream.

Recently Sold to Peter Savio: This site formerly known as Fongs Gulch and the Hoonani subdivision, has recently been sold off to Oahu property developer Peter Savio for the Kihei Wailani Villages housing project. Unfortunately, if built, this will reduce the area’s ability to manage floodwaters, increase flooding in the area, and increase flooding risks for neighbors and future residents.

Permit Entitlements Changing hands: The “Kihei Wailani” project has been dragged on for 19 years since it was first proposed. and the project’s entitlements now appear to be changing hands. Originally issued to Fong Construction Co LTD, the project seems to have been taken over by “Savio”. This highlights the problem of people profiting from the SMA permits themselves, whether or not they actually intend to build the projects or not.  Acquiring permits and entitlements is seen as a way of value-adding to a property, without actually building anything.

High Cost of Affordable Housing: These so-called affordable homes are actually Unaffordable for most locals, and most projects like this end up being sold to middle-class mainlanders who just moved here. Although these houses are marketed as “affordable”, many local residents will not qualify due to poor credit, and lack of a down payment. Some experts say that only 28 percent of Maui’s local families applying for an affordable home will even qualify for a mortgage. Most local families in the area do not make enough money to qualify for these homes, or simply cannot make the payments without taking on extremely risky debt.  If these houses are not sold to locals in a short time period, that developer can sell them to mainlanders at market price, and pocket all the profits. The other hidden costs of owning these homes are the expensive flood insurance and the ever-present risk of damages from a flood.

Restricting floodwater and reducing the capacity of this gulch creates a hazard for residents and the surrounding neighborhoods. The Waipuilani Gulch covers a 14.8 square mile area, that collects rainwater, and funnels it down the gulch and across this property. So not only will all the residents of this project be in the flood zone, the stormwater runoff will then overflow onto all the neighboring properties as well.

The County has failed to recognize and protect essential natural watershed features in South Maui, Such as Gulches, Drainageways, and Streambeds. There are no mauka-to-makai streambeds designated on the County’s Zoning map.  This has paved the way for indiscriminate development and the destruction of important watershed features. This lack of proper planning, has contributed to the degradation and dysfunction of the watershed. And this negligence has led to current problems, such as flooding hazards, and ocean pollution.

These units started pre-selling in April 2021

The problem is that it is located in a major floodway and floodzone: The State and County need to do more to protect the gulches and stream beds that are our vital floodways. During Kona Storms and Flash Flooding events, these floodways are handling vast amounts of fast-flowing stormwater that can be dangerous and destructive. These gulches need to be preserved as the watershed’s fundamental architecture, so they can function as green infrastructure. Instead of building masses of concrete stormwater detention ponds.

Why are they allowing developers to build houses in the gulches that regularly flood, and in notorious flood zones? There is a lot of vacant land mauka of Pi’ilani Highway. There are a lot of bad decisions being made that we will be suffering from for decades to come. Meanwhile, developers are trying to keep their projects quiet and under the radar.

FYI, this project was first proposed (and approved?) back in 2003, way before Kihei’s worst flooding events. Most of which came from this very gulch. But they kept getting extensions after extensions on their permits it seems. This project has been rehashed and passed around several times. It seems that this project, which everyone assumed was dead, escaped the public’s attention and was snuck through another extension approval during the Covid Pandemic in 2020 when the public was staying indoors, and couldn’t attend any county meetings in person.

This project will come up again for a new SMA Permit: This project had its old SMA permit extended despite a huge amount of public testimony against it. However, the Planning Dept said that if they wanted to change their plans from their original 2003 plans, in the future, they would have to re-apply for their SMA permit again.  They do plan to expand this project and they will need to re-apply for the SMA permit, and we need to be there to Testify against the reissuance of this new SMA permit

These projects rely heavily on Exemptions from fees and requirements, and taxpayers will absorb the losses. Some similar projects to this one receive millions of dollars worth of exemptions. Saving vast amounts of money for these for-profit developers. They are also allowed to increase housing, without contributing to building new parks or building infrastructure, like drainage, sidewalks, or road improvements. This is ironic as this project is likely to create problems for traffic, and public safety, as well as contribute to flooding problems that are known to damage the local park, beaches, and reefs. As well as flood neighboring homes.

UPDATE 8/13/2022: The Developer Peter Savio still doesn’t have the necessary permits to build what he has been promising. He only has an SMA permit for a maximum of 54 units, this is based on the old SMA permit that he acquired when he bought the property from Fong. He does not yet have building permits either. He has been told that he needs to get a NEW SMA permit if he wants to expand the project. And yes he does want to expand beyond what he is currently allowed to build. He said if he cannot build it he might sell the vacant land into small lots so people can “build their own homes”.

The Location of this project was not chosen by accident. It appears that developers are deliberately targeting the cheapest, most vulnerable, vacant lands. The reason that these lands have remained vacant for so long is that they are located in gulches that flood, and they also have some restrictions intended to protect the environment from overdevelopment. We think that developers have found a way around these environmental restrictions by co-opting the privileges that are given for “Affordable/workforce housing.

This Developer is targeting MULTIPLE gulches in South Maui:  A definite pattern of targeted vulnerable gulch lands is emerging. Click here to read about another North Kihei Gulch at risk from this developer:  Kulanihakoi Gulch at Risk. 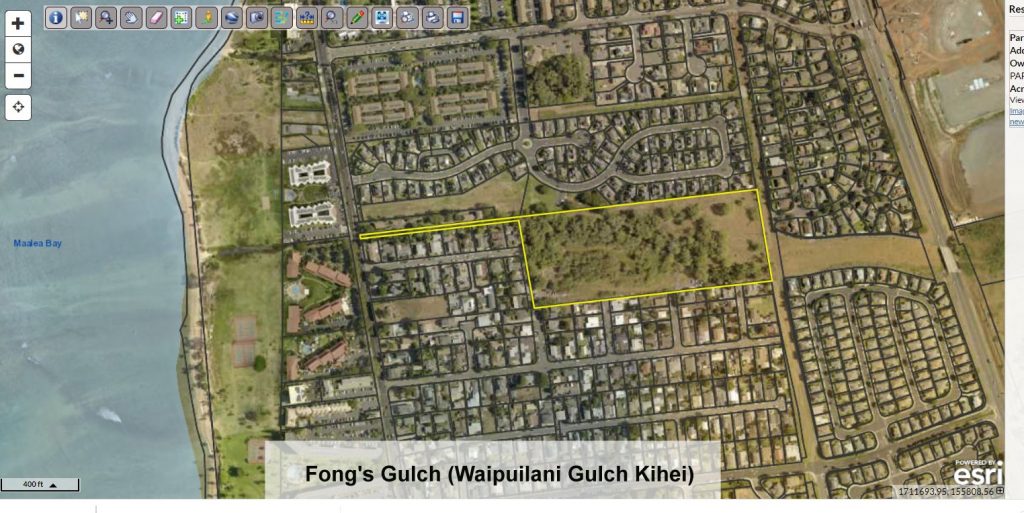 In case you didn’t know, this exact gulch is the single biggest cause of flooding in Kihei. 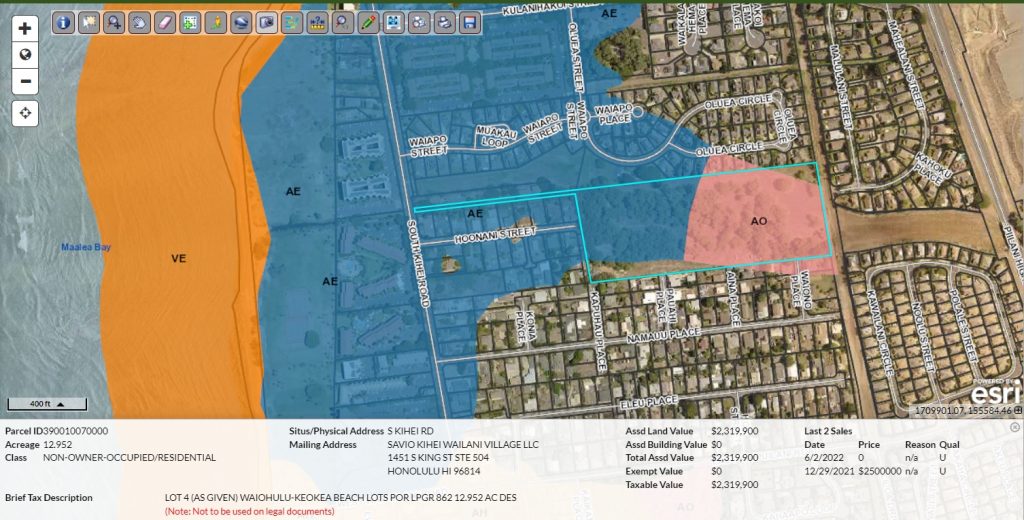 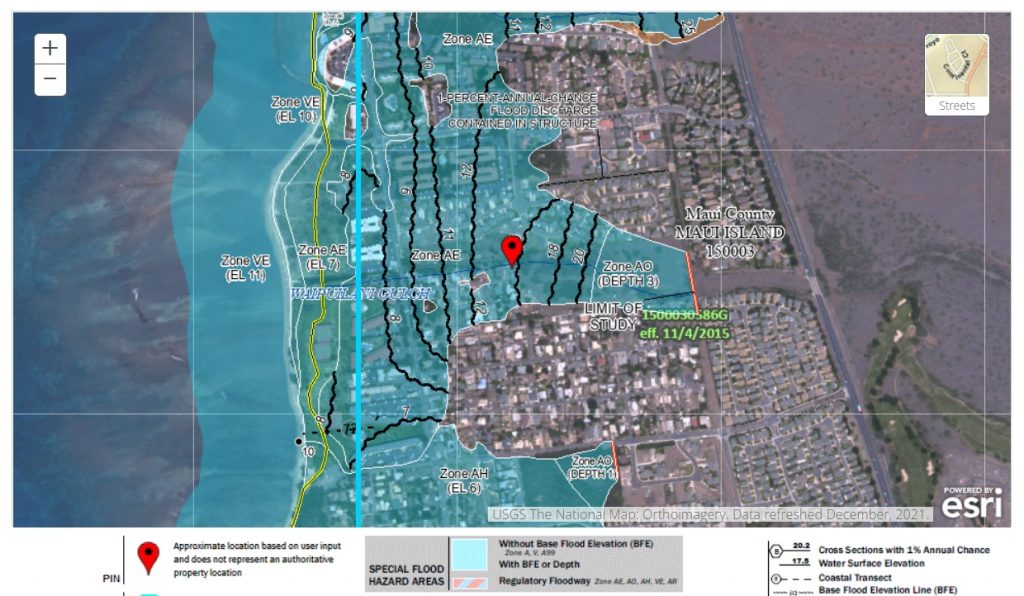